WEEK 5 CALM BEFORE THE STORM

I have just finished reading a book titled, “Calm Before the Storm” authored by Janice Dick.  It is a historical romance novel based on events occurring exactly 100 years ago in the geographic area where Mary and I are right now.  The main character is a Johann Suderman who finds faith and love during the turbulent times leading up to the Russian Revolution in 1917.  I have owned the book for 11 years and since it is about a Suderman, I decided that I should actually read it.  The parallels with our circumstances here today are uncanny.  There are political storm clouds on the horizon.  We do not know if the storm will hit with all its fury or dissipate without a whimper.  There is an underlying tension in Ukraine which you can feel in Molochansk.  It has made our stay here a unique experience.  It does affect our work and I would like to describe one day’s activities to show how all issues are inter-mingled.

On Friday April 25, we were scheduled to make a presentation to representatives from the Zaporozhyian Oblast (province) on how to improve tourism in the area.  We were selected because the Mennonite Centre had won a tourism award last year for attracting foreign visitors.  With typical western thinking, we set up a “PowerPoint” presentation outlining the background, issues, and proposed recommendations.  It had been our original intension for Dema (our manager at the Mennonite Centre) to make the presentation as we had only 5 minutes and I could not speak Russian.  As we drove to the event, we discussed the optics of the presentation and decided that it would have more impact if I made the presentation and Dema translated.  We only had 5 slides and knew we could make the 5 minute deadline (which was rigorously enforced).  We knew that there would be a significant audience and at one time in my life having one hour to prepare a major presentation would have thrown me for a loop.    Now I have progressed to the point where you just go with the flow and cope as best you can.  As I was thinking about my presentation, I was distracted by a military convoy on the highway.  There were 5 large tanks being transported west.  They were on large trailers pulled by multi-wheeled vehicles moving slowly down the road.  I did take a picture from the rear of the convoy where I would not be seen.  It was a stark and scary reminder that war is imminent. 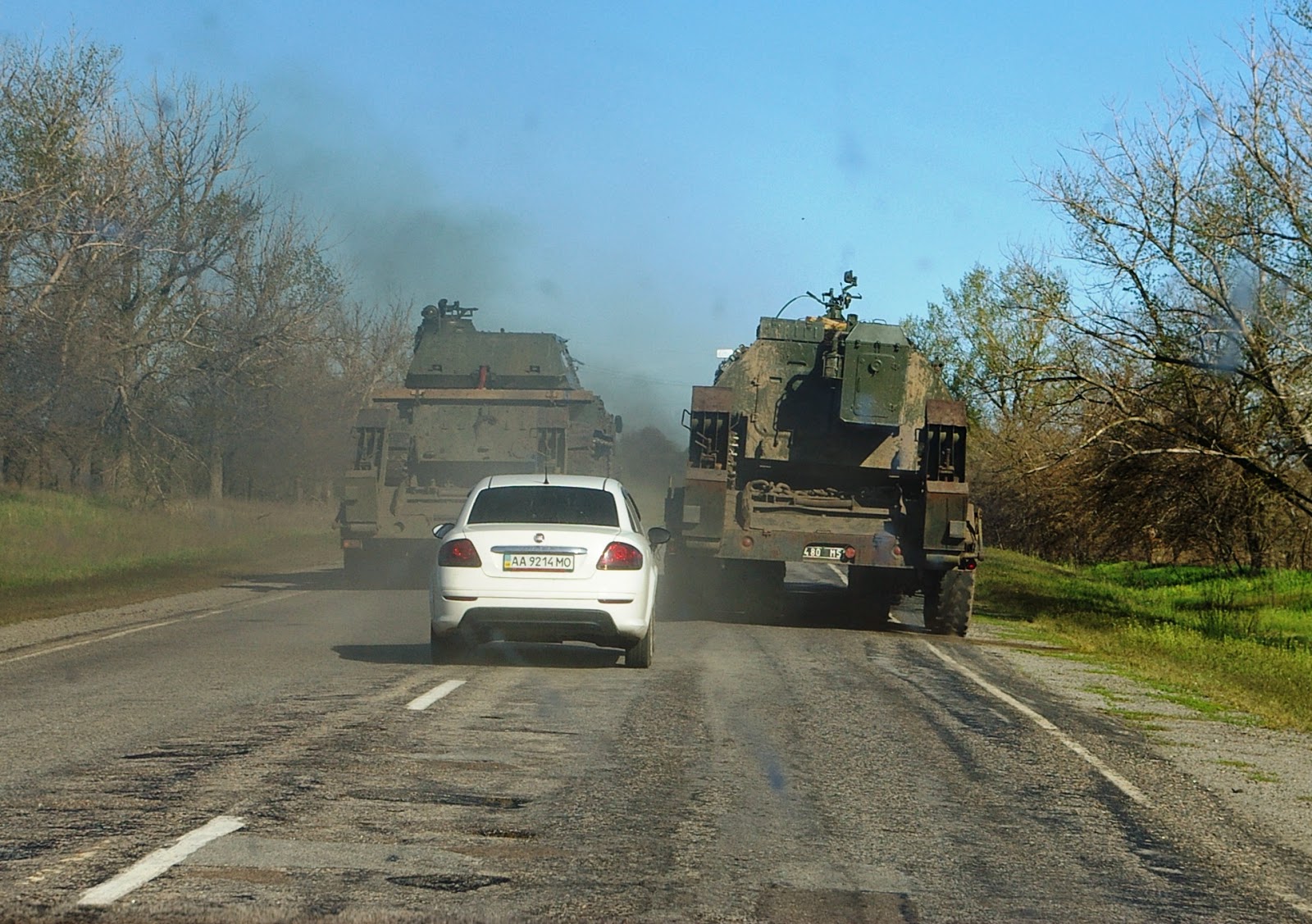 As we approached Zaporozhye, we had to pass the police checkpoint I referenced in my previous blog. The forward observer with his binoculars was focused on our vehicle until we were within 10 feet of his position. I had my camera on my lap but let it slide to the floor where it could not be easily seen as I did not want to take a chance on having my intentions misinterpreted.  We were directed to stop at the checkpoint.  Dema provided his requested identification; they looked into the vehicle and then let us proceed.  We suspect they were looking for pro-Russian demonstrators who would like to enter the city and seize government buildings.

Life returned to normal after passing the checkpoint.  We arrived at our meeting on time, registered at the front desk and entered the hall holding 250 people.  After the official welcome, the presentations started.  You could categorize the presentation as blatant commercials for an area or facility, complaints about the supply of electrical power, or allegations of corruption.  None dealt with any policy issues that the area could implement to improve tourism.  Just before we were to speak, Dema checked his smartphone and got some disturbing news.  A helicopter had been shot down in eastern Ukraine and tensions were rising.  Dema’s immediate assessment was that we might have to evacuate that day.  With that disturbing news ringing in our ears, we got up and made our presentation.  Our recommendations for increasing Mennonite tourism into the area were to establish a program that would encourage the preservation and restoration of historic Mennonite buildings as many are being demolished and to start a “cottage” industry that would enable Mennonite tourists to actually spend a night or two in a historic Mennonite house.  We received a spontaneous applause for our presentation.  We did get their attention. 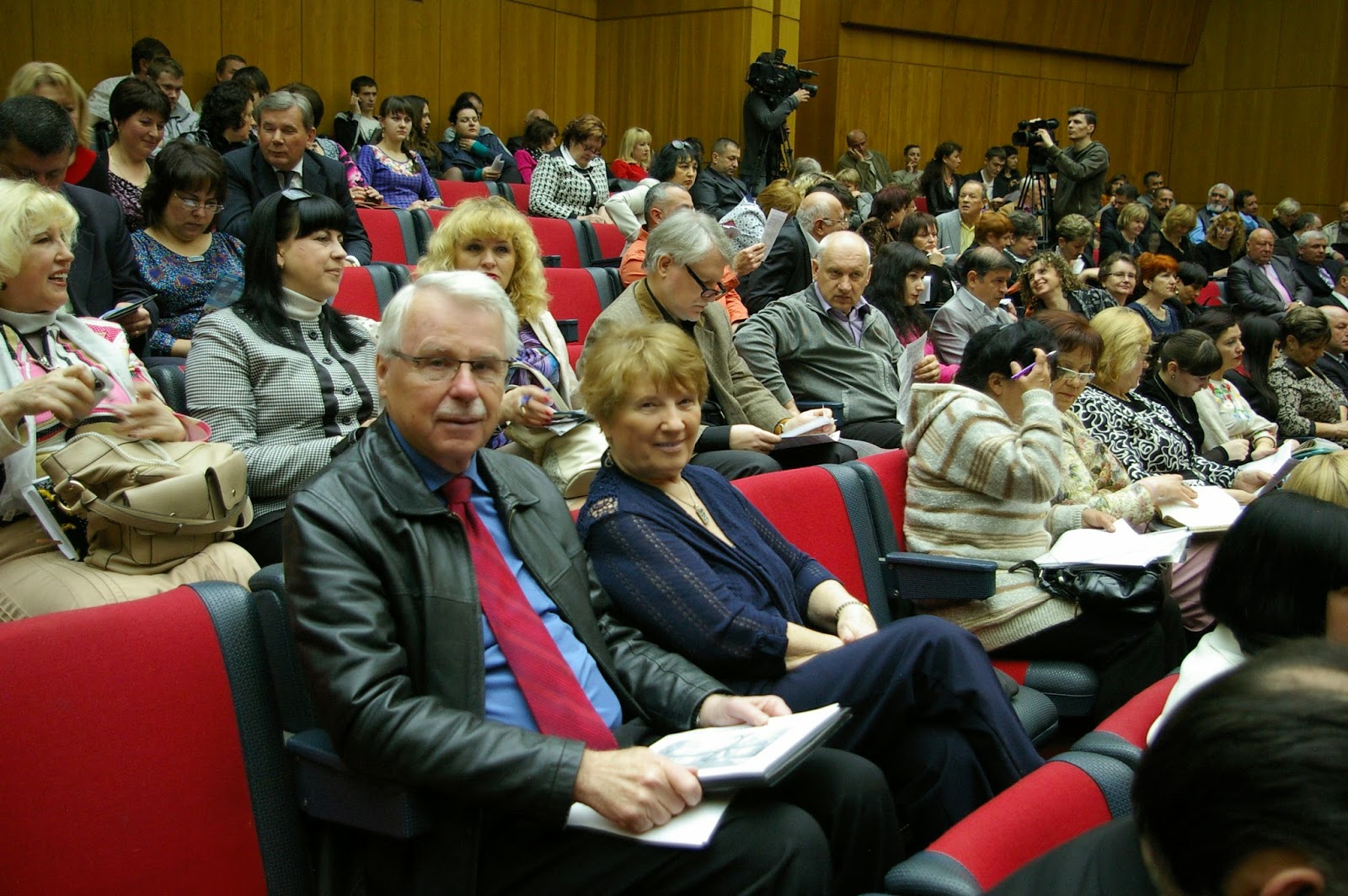 The presentations after ours started including the word “Mennonitesky” as they also wanted us to know that Mennonites had also lived in their area.  The addition of the letters “sky” or “ski” to a word begs an explanation.  The addition of these letters changes a word into an adjective.  That is why the Mennonite Centre is referred to locally as the “Mennonitesky Centrum”.  It also explains why many surnames in Ukraine end in these letters.  In Ukraine, you always write or state the surname first followed by the given name.  The surname in effect becomes the adjective describing or qualifying the given name. (Just thought you had forgotten to ask but really wanted to know.)

After the great feeling about our presentation, it was back to the political reality in Ukraine. As we sat eating lunch and contemplating our next move, Dema received great news from his wife Oksana.  The whole dance class at the Molochansk School of Music had received their visas to go to Greece and participate in a prestigious dance competition.  Oksana and their daughter Katya would be off to Athens in a few days.  While I am sure Dema’s response would have been quite diplomatic, the bottom line was, “That’s great, now can you check our emergency luggage in case we have to evacuate tonight”.  On the way home I started mentally thinking about what I should pack.  I knew I had to assemble my camera bag, computer, toiletries and the book I was reading.  War or no war, I had to know how the romance novel “Calm Before the Storm” ended.  As an afterthought, I realized I should also pack a change of clothes.  I was mentally ready to go.

On arrival at home, we checked our emails.  There was no evacuation warning from the Canadian embassy.  Other news sources also were not alarming.  All was still calm in Molochansk and we thankfully spent the night in our own bed.