Easter is always special in Ukraine.  This year Ukraine celebrated it the same time we do in the western world.  Mary and I have adopted the philosophy of “When in Rome ….”.  Well when in Ukraine, we attend the Orthodox Easter service as well as our regular service at the Kutuzovka Mennonite church.  The Orthodox service starts Saturday at midnight and continues on till sun rise, at which time all the paska and decorated eggs have been blessed and people can go home, break their 6 week long fast and eat the forbidden eggs and paska.  In the past we have gone to the Orthodox service at midnight, stayed for one hour and then went home to sleep.  This year with better coaching from an Orthodox believer, we now realize the real program does not start till 1:00 AM.  We went there with my camera, ready for the action.  Again we only stayed for one hour but we did see the first procession with the priest leading us outside and around the church.  There would be 2 more processions during the night. The number 3 is very important in the service as it represents the Trinity.  After the procession, we went back inside.  With the choir chanting in the background, the priest came out 3 times and walked back and forth with his smoking thurible (a device in which incense is burned during a worship service).  He concluded each walk with 3 chants of “Christ is risen”.  The congregation would respond with “Christ is risen indeed”.  They would then cross themselves with the Orthodox cross (top to bottom and right to left) with some also bowing quite deeply.  It was a very worshipful environment even though we really did not understand what they were doing.  I did take a few pictures (with their permission) but felt it was an intrusion on their beautiful worship service. After a short night, we were at the Kutuzovka Mennonite church at 8:30 AM for their Easter breakfast, followed by the usual 2 hour service.  Brevity is not a Ukrainian trait.  I was thankful that the sermon was a bit shorter and they had more variety in their service, including pageants involving the youth and young children.  We did have a nap in the afternoon to catch up on our sleep. 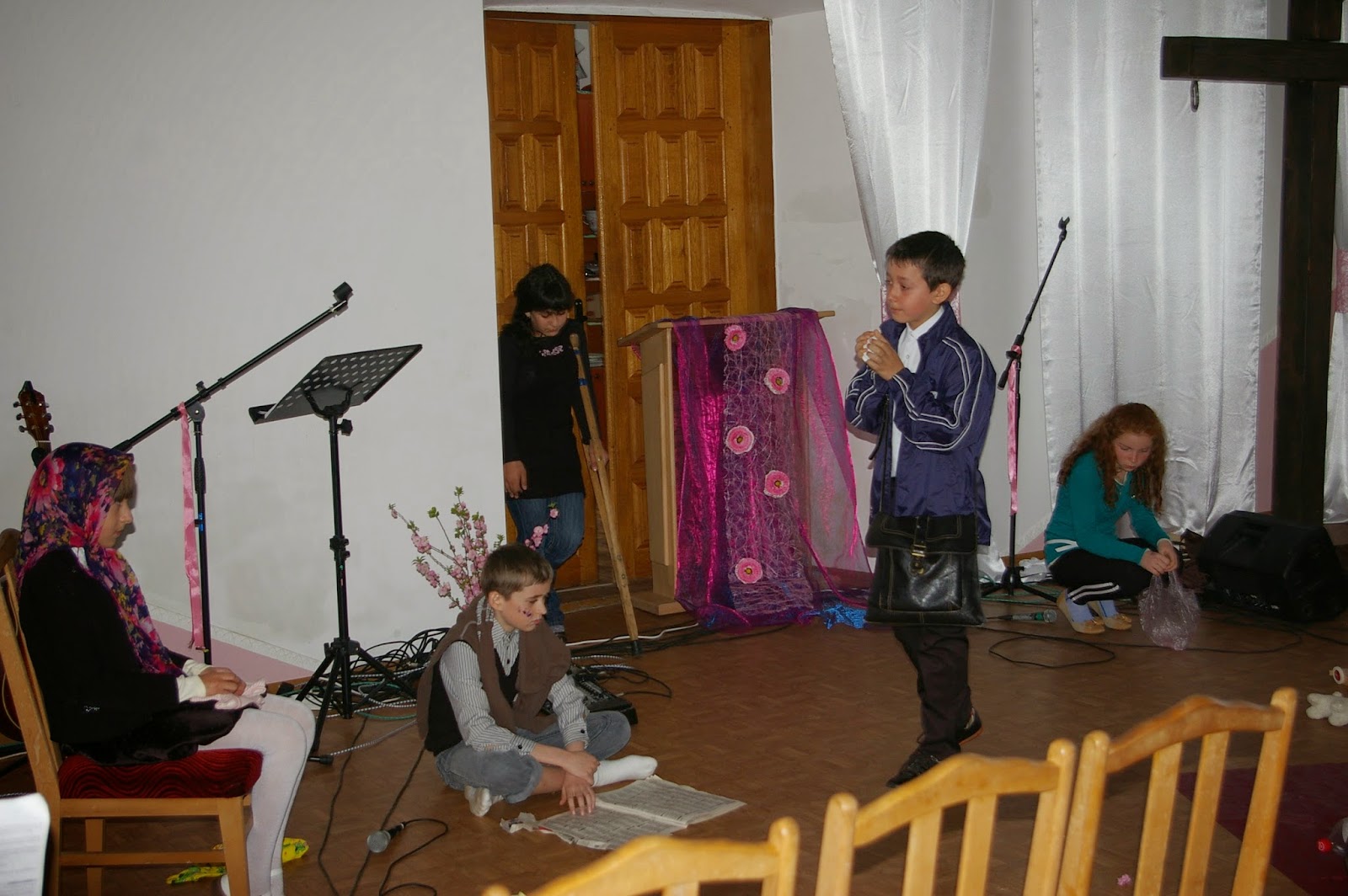 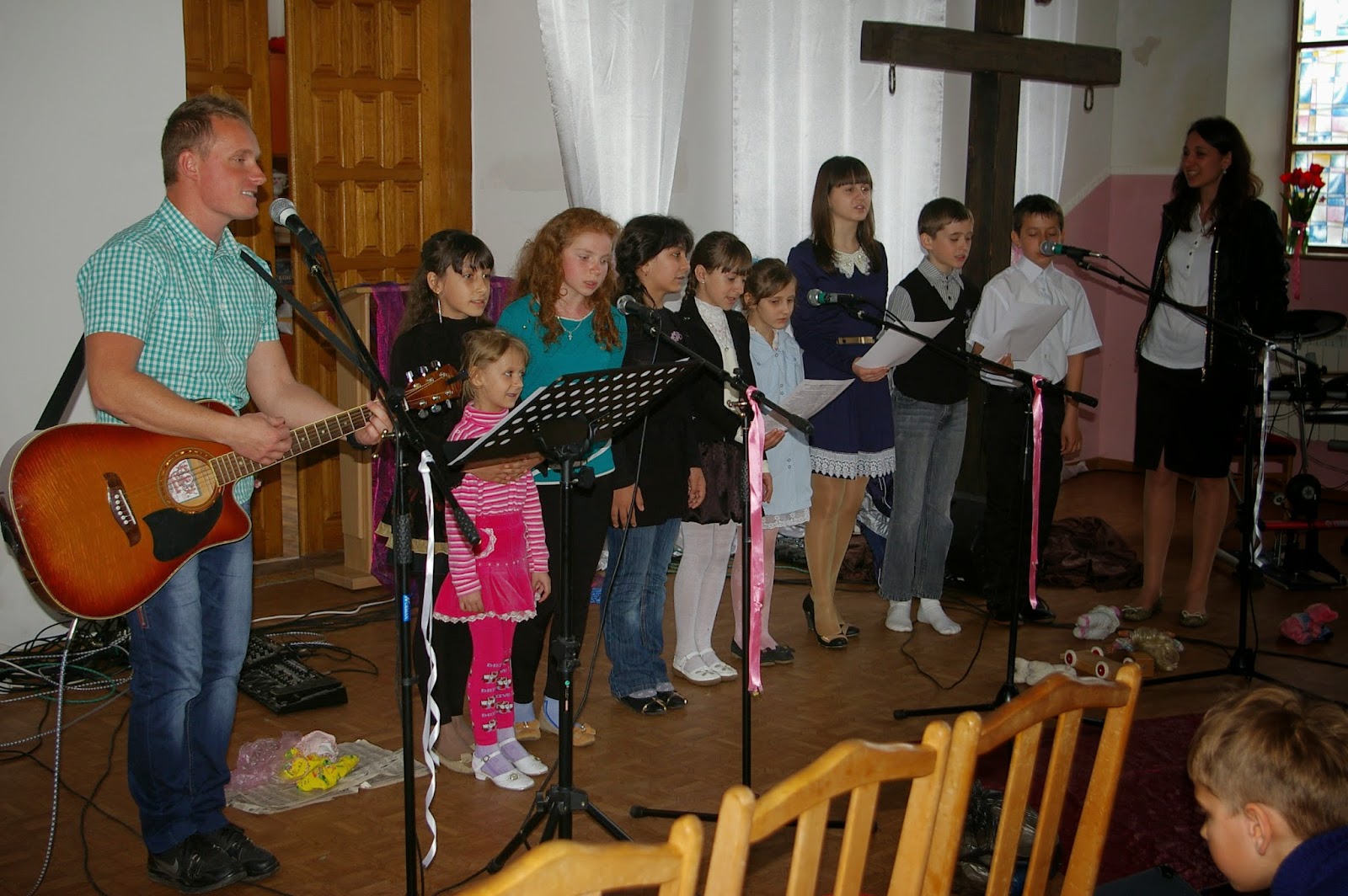 Good Friday is a regular working day in Ukraine, (Easter Monday is a holiday) so we showed up for work.  It was a busy day as we had to deal with three petitioners.  They represented a typical cross section of the issues that we deal with.  The first one was a lady requesting assistance in purchasing medication.  We typically give a one-time assistance of $20.00 worth of medications for such a request.  This lady had already received such assistance from us through one of the medical doctors who act as agents for us.  Consequently, her request was denied.  The second lady had a request which was much more difficult to deal with.  This lady has a 35 year old daughter who is in desperate need of an artificial hip.  The daughter is in so much pain that she cannot walk.  They have tried numerous means of fund raising without success.  The artificial hip has to be purchased from Germany, and with the decreasing value of the Ukrainian currency, this has become impossible for them to pursue.  The problem for us was that the value of her request greatly exceeded the amount that we typically provide.  We sympathized with their dilemma and agreed to document the request and submit it to our board in Canada for consideration.  The board will then have to look at the budget, consider the precedent that we may be setting, and discern the collective will of our supporters in making a decision.  The third request was from the local psychiatric hospital requesting assistance in buying a lawn trimmer in order to maintain their extensive grounds.  We have had a good relationship with the individual making the request as well as the organization itself and were able to approve their request from our discretionary funds.  Yes it was a “Good” Friday for us at the Mennonite Centre.

I guess I could describe myself as an amateur historian.  I am always trying to get a better understanding of the Mennonite story in Ukraine.  I recently talked to a local Ukrainian who mentioned that his mother was born in Lichtenau (now called Svyetlodolinskoye) in October 1941.  This is a former Mennonite village which was evacuated by the Soviet authorities in August 1941 as the German army approached the area.  His grandmother has since passed away but I was eager to know if she had ever talked about the events of August 1941 when at least 90% of the population in her village and the surrounding area was forcibly shipped to Kazakhstan.  I was looking for an eye witness account from someone who was not directly involved in the event.  I was amazed when he told me that his grandmother had never spoken of the event as she must have been aware of suddenly losing all her neighbours.  She had talked about their precautions of hiding in the woods nearby with her family as the military front approached their area.  This would also have been very traumatic and I just have to accept the fact that it was more important in her mind than the sudden loss of her neighbours.

Speaking of traumatic events, we were shocked on Tuesday to see military barricades on the highway as we approached the city of Zaporozhye.  We were on our way to participate as judges in an English public speaking contest sponsored by the Lithuanian Christian Collage. It was an enjoyable event that was overshadowed by the increasing military presence we saw that day.  We had seen a number of military vehicles on the road but were shocked to see the barricades.  There were strategically placed concrete dividers that forced traffic coming into the city to slow down and move onto the shoulder.  These were supplemented by sand bag bunkers holding machine guns.  On reflection, I have been able to determine that these were police barricades and not necessarily military ones.  They are designed to provide a choke point if the authorities feel the city is going to be invaded by pro-Russian protesters.  I had my camera ready as we left the city and neared the barricade.  We discussed the wisdom of pointing a camera at people who might be pointing a gun back at you.  As we approached, the police were focused on incoming traffic and since we were ignored, I decided to take a risk and took a number of pictures through the car window as Dema slowly drove by.  It will be something to remember when I get old.