We arrived at Olga’s place on Saturday and spent the evening planning our week.  Our objective was to obtain a better understanding of the work in the Zaporozhye area.   It wasn't long before we had the week filled with at least 2 meetings per day.  Tuesday morning we left on an inspection trip to Dolynske, which covers the former Mennonite villages of Neu-Osterwick and Kronsthal.  Ostensibly this trip was to look at the former Mennonite school which was still in use after 100 years and where the Mennonite Centre had provided assistance in obtaining new windows, desks, and chalk boards.  In reality, this destination was a highly personal choice on my part.

One year ago, a good friend of mine, Reg Litz, was going to visit us in Ukraine and we were going to explore these villages as they were his ancestral home.  Instead of arriving last May as planned, we received an email that he had a very serious type of cancer and would be undergoing surgery.  Reg passed away last December at the young age of 55.  On one of my visits with him in the fall, he acknowledged that he was not going to get to Ukraine and he asked me to make the visit to his ancestral village and take a picture of the location where the church stood where his grandparents were married.  That was the real reason for my trip that day.  While we had the original maps of the village, it was hard to determine the precise location of the church.  I believe he would have been pleased to see that there is a beautiful Orthodox church very near the site of the church where his grandparents were married.

Mary and I both felt Reg’s presence on the trip that day.  On our tour of the school we got to see every classroom with the students and teachers present.  I could just imagine Reg, with his high level of energy and enthusiasm, taking over each class and starting a discussion with the students.  He would have found a way around the language barrier.  In one class with a teacher and 2 students (they claimed 3 people were sick that day), I imagined Reg with his crazy sense of humour suggesting that the class break up into discussion groups and resolve some unique world crisis.  It was healing for us to travel with the memory of Reg that day.
There are many things I do not understand about Ukraine.  The country claims to be poor when it comes to furnishing their schools with needed equipment and supplies.  On the other hand, in this school they had a student/teacher ratio of less than 10 to 1.  This is not the case for all schools but obviously there is no one setting overall priorities on how to spend education dollars.  The people responsible for the budget for salaries obviously have no responsibility for other aspects of education and do not make trade-offs between these areas.

Another day we drove north to visit a dairy farm started by a Manitoban named Garry Verhoog.  His children are operating the original dairy farm in Canada, located south-east of Steinbach.  He has come here as part of his Christian ministry to establish a self-sustaining dairy operation and trade school where he can teach orphans a valuable skill while providing employment for many locals.  Through good feeding and genetics, he has managed to double the milk production over that of local farmers.  I admire Garry for undertaking the difficult challenge of learning a new language and deciphering the culture so as to successfully operate a business in Ukraine.  You can read more about his work in his blog at: http://moo-oosings.blogspot.ca/.    He is currently expanding his operation and will soon have a barn for 100 milk cows.  The cows will be free roaming with a separate milking parlour.  They are even building classrooms in the barn to properly instruct the orphans on site.

I like Garry’s practical approach to ministry.  With increased security in the area marked by road blocks, Garry has responded by providing the nearest security checkpoint with a weekly supply of milk.  One time he bought out all the hamburgers at McDonald’s and dropped them off as he went through the security roadblock.  This would have been a gourmet treat for the police and military staff.

Others are also reaching out to the military in this unsettled time.  Last Sunday at church in Zaporozhye, we heard a report from people in the church who had made a special trip to deliver humanitarian aid to a group of soldiers camped out in a field near Mariupol.  This is in the eastern part of Ukraine on the Sea of Azov.  They brought essential items such as toilet paper, flashlights, and food.  They were in cell phone communication with the soldiers as they approached and were guided in with special instructions.  The area surrounding the encampment is mined and getting off the path could be dangerous.  The group of civilians was thanked for their assistance and given a ride on an armoured troop carrier.  Another emergency supply convoy is planned for the coming week.

Obviously the situation in Ukraine is not stabilizing.  I have been warned by some readers not to take pictures of any military activity and definitely not to post it on my blog as they are concerned for our safety.  I would like to respect this request as much as possible but some exceptions will have to be tolerated.  The next picture you see is a military vehicle from another era.  It is located in the museum in Dnepropetrovsk and shows a buggy built by Mennonites, captured by the Red Army (communists) who mounted a machine gun on the back seat.  The message written on the back says, “Death to General Wrangel”.  This general was in charge of the White Army fighting the communists.  He fought a number of battles in the area occupied by Mennonites. 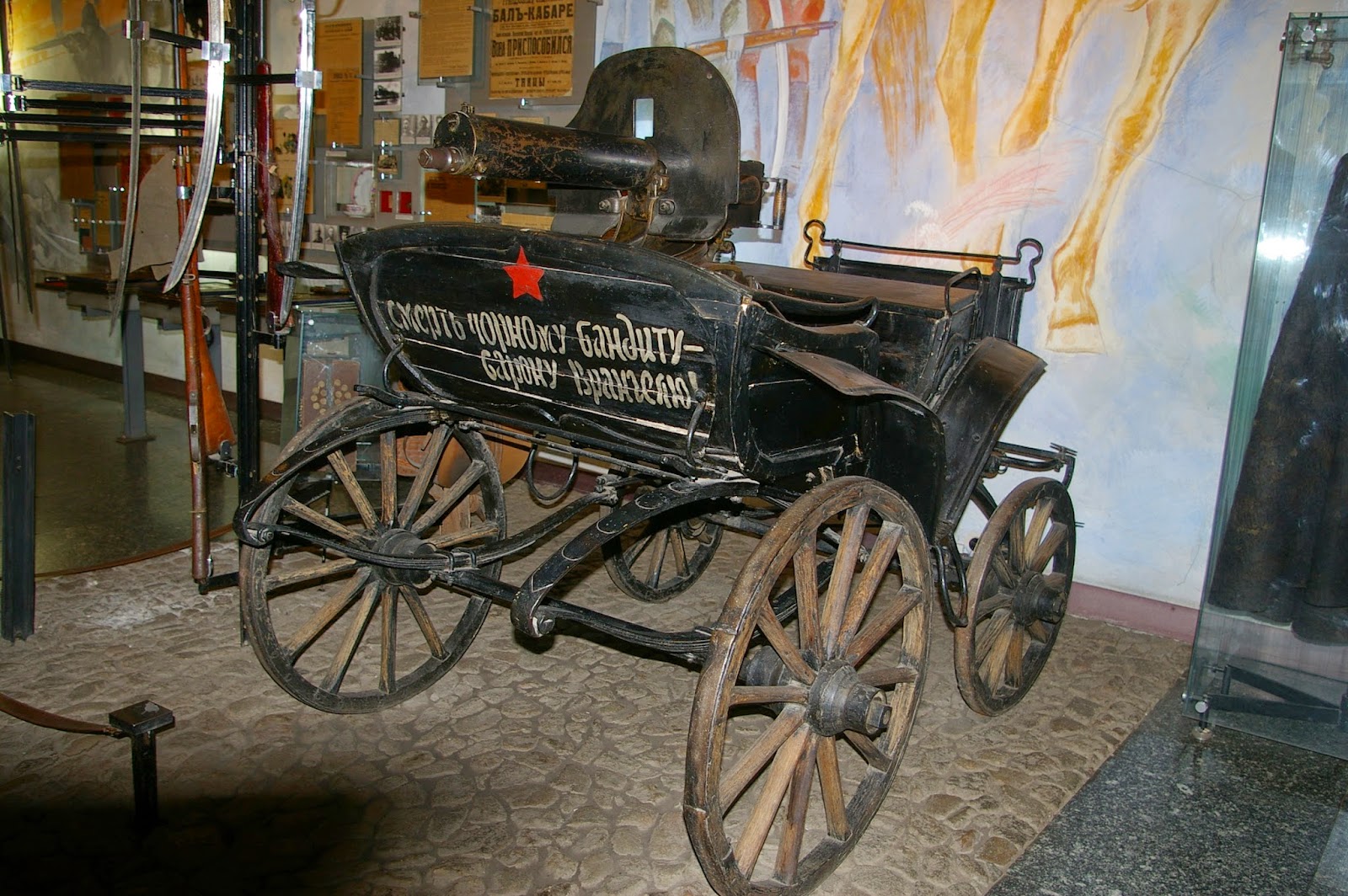 Mary and I would like to complete our term in Ukraine and go home as scheduled on May 28.  We realize that this cannot be guaranteed and that our plans have to remain flexible.  Your ongoing prayers for our safety are much appreciated.