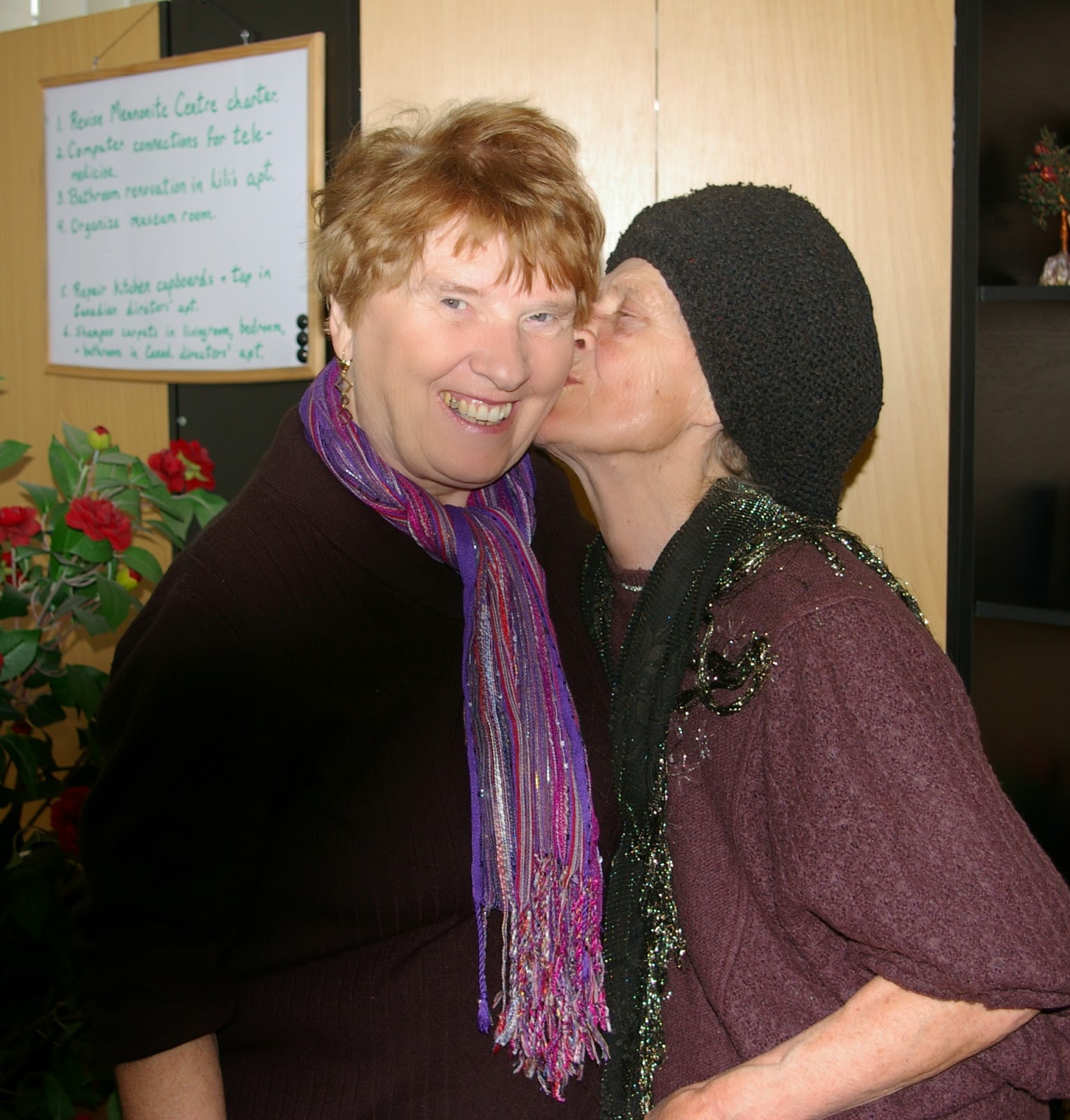 Last Friday was one of those days when you suddenly feel really glad to be working at the Mennonite Centre in Ukraine.  An elderly lady had come into our office at the Centre and started a very animated conversation in Russian with Dema, our manager.  He started smiling and requested that she speak to us directly.  She was happy to oblige him with this request and spoke to us so rapidly and passionately that Dema had trouble keeping up with his simultaneous translation.  Her name was Tamara Sedova and she was thanking the Mennonite Centre for paying for the cost of cataract surgery for one of her eyes.  I gather she must have been fairly blind before the operation.  Her eye sight had been restored to such a degree that she could almost not believe it.  To her it was a miracle.  She kissed me on the hand and kissed Mary on the cheek.  It was the most enthusiastic thanks I have ever received in my life.  It was one of those moments that you later realize should have been captured on video, but had occurred so quickly that the spontaneous part is over before you think of looking for a camera.  We did get a picture of Mary being surprised with a kiss.

The tele-medicine pilot project has been moving along slowly since it was approved last year.   The purpose
of this project has been to improve access to medical care in the former Mennonite villages.  Many villages are staffed with a nursing station or nurse practitioner, known as a feldsher in Ukraine.  Doctors are only stationed in larger towns or cities.  The tele-medicine project is going to use computers, video cameras, and electronic communication to provide a direct link from the nursing station to doctors in larger centres to assist with diagnosis and consultation on more complex medical issues.  It requires solving a number of technical issues.  The biggest problem however is finding doctors and staff in the nursing stations who are comfortable working with the technology.   The doctor we are working with recently had a new nursing station assigned to her care.  We decided to check out the nursing staff at this new location regarding their enthusiasm for this project.  We drove to the former Mennonite village of Liebenau (east of Tokmak for those that are into the geography of the area) and talked to the staff.  They were quite enthusiastic and seemed to have some computer knowledge.  They explained that they had just had a patient that morning that they could not diagnose and would have appreciated a doctor’s opinion.  Dema can now work on the technical issues and hopefully the project will be operational in the near future.

On the way home from Liebenau, we had to drive through the former Mennonite village of Schoensee and 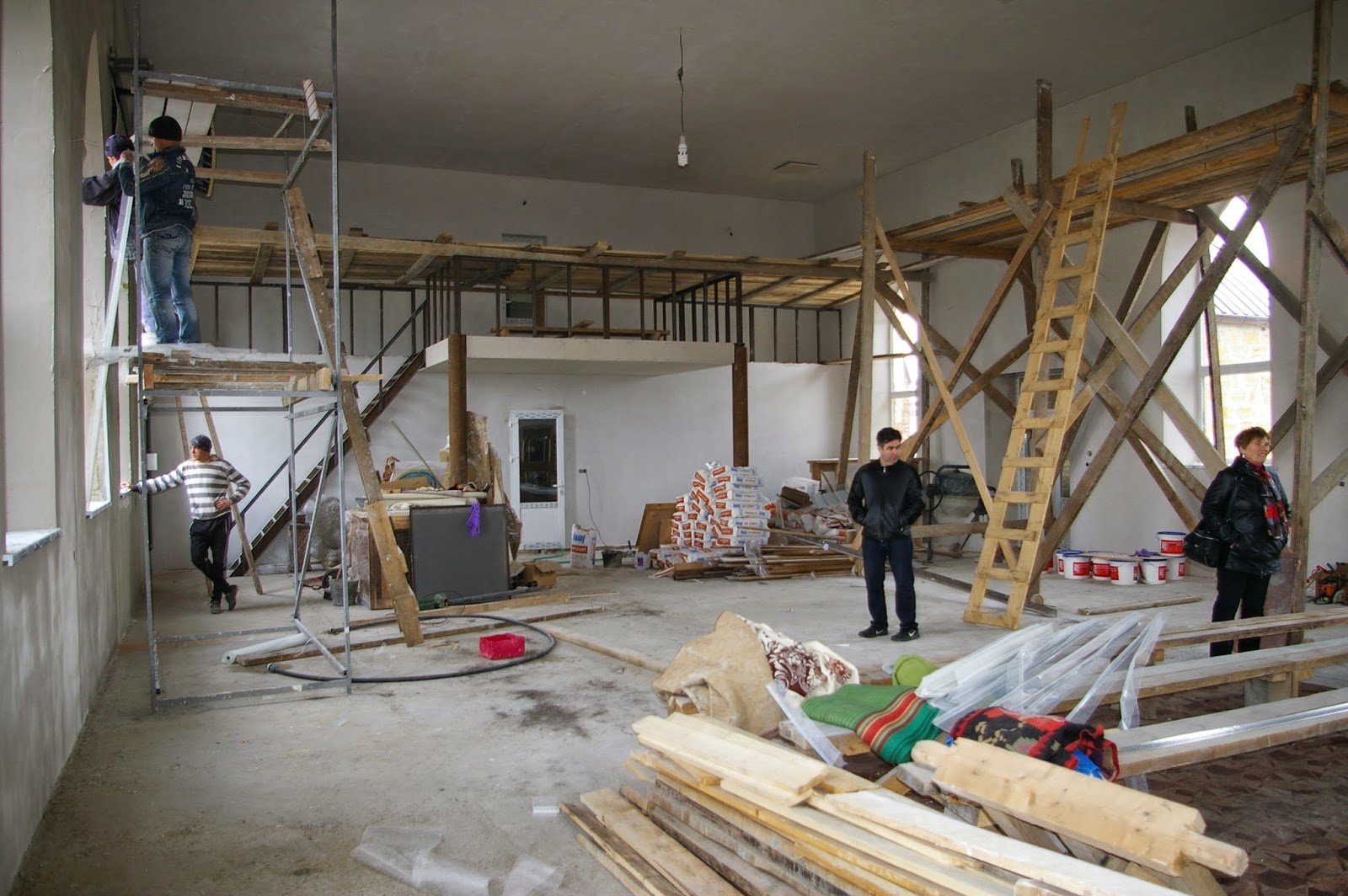 had a chance to check out the progress on the restoration of the former Mennonite church by the Greek Catholic church.  The Mennonite Centre has provided some assistance with purchasing supplies for the renovation.  There was a crew on the premises hard at work plastering the inside.  Last year, the church had a dirt floor and no ceiling.  Now a concrete floor had been poured and the ceiling was complete.  The church is already being used for worship services.

I have often wondered how much the new residents of the former Mennonite villages knew or even cared to know about the history of their village.  We had an interesting incident this past week that shed some light on that subject.  My aunt and uncle are visiting from Canada and of course we had to take them to Alexanderthal, the former home of the Suderman clan.  The original Suderman farm site was no longer in existence and it was difficult to determine its precise location as I could find no specific markers.  Three years ago when touring that village, I had a chance to talk to one of the inhabitants who lived in a house that I assumed was close to the original Mennonite farm site.  I even gave him a printout of what the original farm looked like with all its buildings.  On our visit this past week, we were recognized by this individual who came out to invite us onto his property.  He had something specific that he wanted to show us.  He brought out my original printout of the Suderman farm and pointed to a structure built on top of a well.  He then showed us that this structure had survived and was located right beside his house.  We finally had confirmation of the precise location of the original Suderman farm.  I was amazed that this current resident of Alexanderthal had studied the picture carefully and even preserved it.  The photographs show the well structure circled in red on the original picture as well as how it looks today.
You can click on the pictures to enlarge.

We went to the Kutuzovka church on Sunday and sat through the usual 2 hour service.  As we were leaving, one of the regular attendees at the church spoke to my uncle in low-German.  We were amazed as we had never before had any contact with this individual.  We knew that her ability to speak low-German indicated that she was of Mennonite background.  She did volunteer that her maiden name was Janzen.  We will follow up with her and try to get her story.

In my first blog I started off talking about the volatile political situation in Ukraine.  The sense of tension has eased considerably from when we first arrived.  However, there are more protests in the extreme eastern part of Ukraine and one can feel the sense of unease rising again.  We have seen some military vehicles on the road carrying soldiers.  Our immediate area is very safe at the moment and we continue to pray for a peaceful resolution to the crisis.

For more information on the work of the Mennonite Centre, please go to http://www.mennonitecentre.ca/