WEEK 8 REACH FOR THE TOP

Mary and I have returned from our trip to Kyiv and are glad to be back in Molochansk.  The trip to Kyiv was great.  We had to make contact and provide funding for several Mennonite Centre projects in Kyiv.  We had also booked a meeting with the Canadian Ambassador, Troy Lulashnyk.  He is a former Manitoban from the town of Selkirk with his own Ukrainian roots.  It is reassuring to know that there is someone who is looking after our interests in a foreign country.  We also had delightful visits with Anne Mattson and Clint Martin – staff members at the Canadian embassy with personal connections to family and friends.

In Kyiv, we did become tourists for an afternoon and toured the devastation that took place on the Maidan square.  Most of the barricades are still in place.  The site has become a tourist destination as well as a shrine for Ukrainians.  The protestors in their tents are used to sight seers and having their pictures taken. It was touching to climb the area where most of the fatalities occurred.  Dema bought flowers and laid them at selected memorials as we made our way up the hill toward the location where the snipers had hidden behind trees.  From pictures and descriptions on the memorials, we could see that the fatalities were of many ages – not just young people.

There was another Kyiv destination that was on my personal bucket list.  I wanted to climb the “Motherland” monument.  This was built in 1981 to celebrate the end of the Great Patriotic War or WW II as the rest of us call it.  I first saw this monument in 2006 when our cruise ship neared Kyiv.  It towers above the city.  It was in 2011 that Dema, our Mennonite Centre manager told me that it was possible to climb it.  I was informed that it was an arduous climb and very expensive.  For the equivalent of $5.00 you could take an elevator up to the base.  The fee for manually climbing to the top was $20.00.  The Motherland Monument is 203 feet (69 metres) in height and towers above the Statue of Liberty at 151 feet (46 metres).  It had become my Mount Everest. 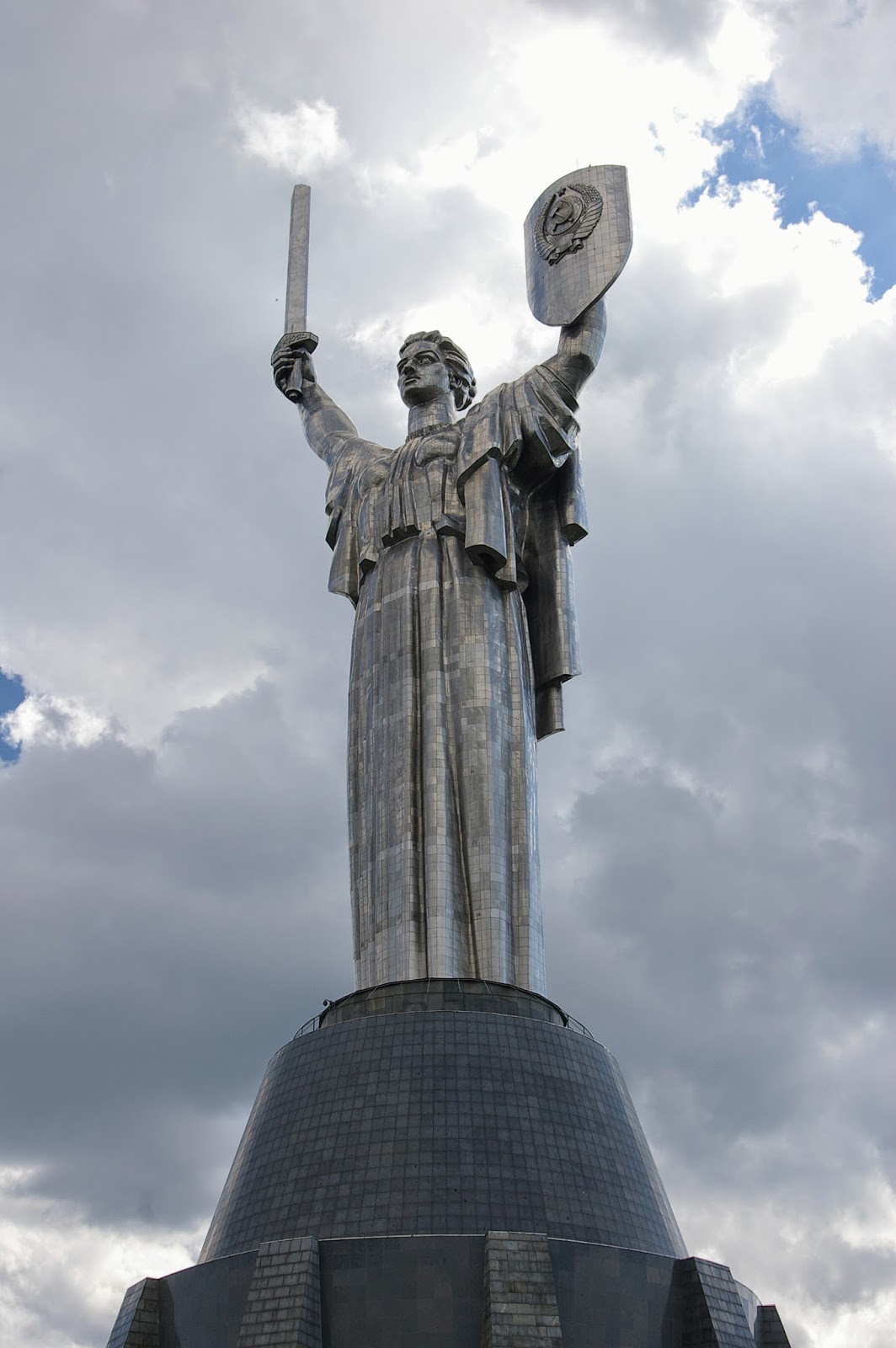 The pursuit of my goal did not start off well.  The lady at the box office took one look at me and shook her head.  I did not even need an interpreter to know that the news was bad.  She summoned a guide, who also looked at me cautiously, asked for my age, and then announced that there was no way that he could accept responsibility for my safety.  I tried arguing that if I bought the ticket and did not make it to the top, it would be my responsibility and no refund would be requested.  That was not good enough.  Eventually I had to concede defeat and bought a ticket taking me up to the base.  Dema was allowed to purchase the prize ticket taking him to the top.  As we left the office with our guide, Dema started a conversation with our guide.  He discovered that that there was an additional “insurance policy” that only the guide could issue that not only reduced my age but also made me an acceptable risk.  For a mere payment of only $30.00, I was also going to reach for the top.

As soon as I had made my payment, we were given the rules.  We had to strap on a climbing harness which was attached to a rope extending up to the top.  The ascent went straight up an iron rung ladder.  After 20 feet of climbing I had to transition to another ladder about 90 degrees to the left.  The climb became a 45 degree climb as we worked our way up the arm of the monument.  After another steep climb I had to crawl around some sharp corners as we entered the palm of the hand.  Another 6 feet straight up and I had to boost myself up through a trap door to the platform directly behind the shield.  The climb was not challenging in terms of physical endurance but rather required an agility to cope with tight maneuvers.   Dema and I were soon standing in the cage behind the shield, very proud of ourselves and grinning like Cheshire cats. 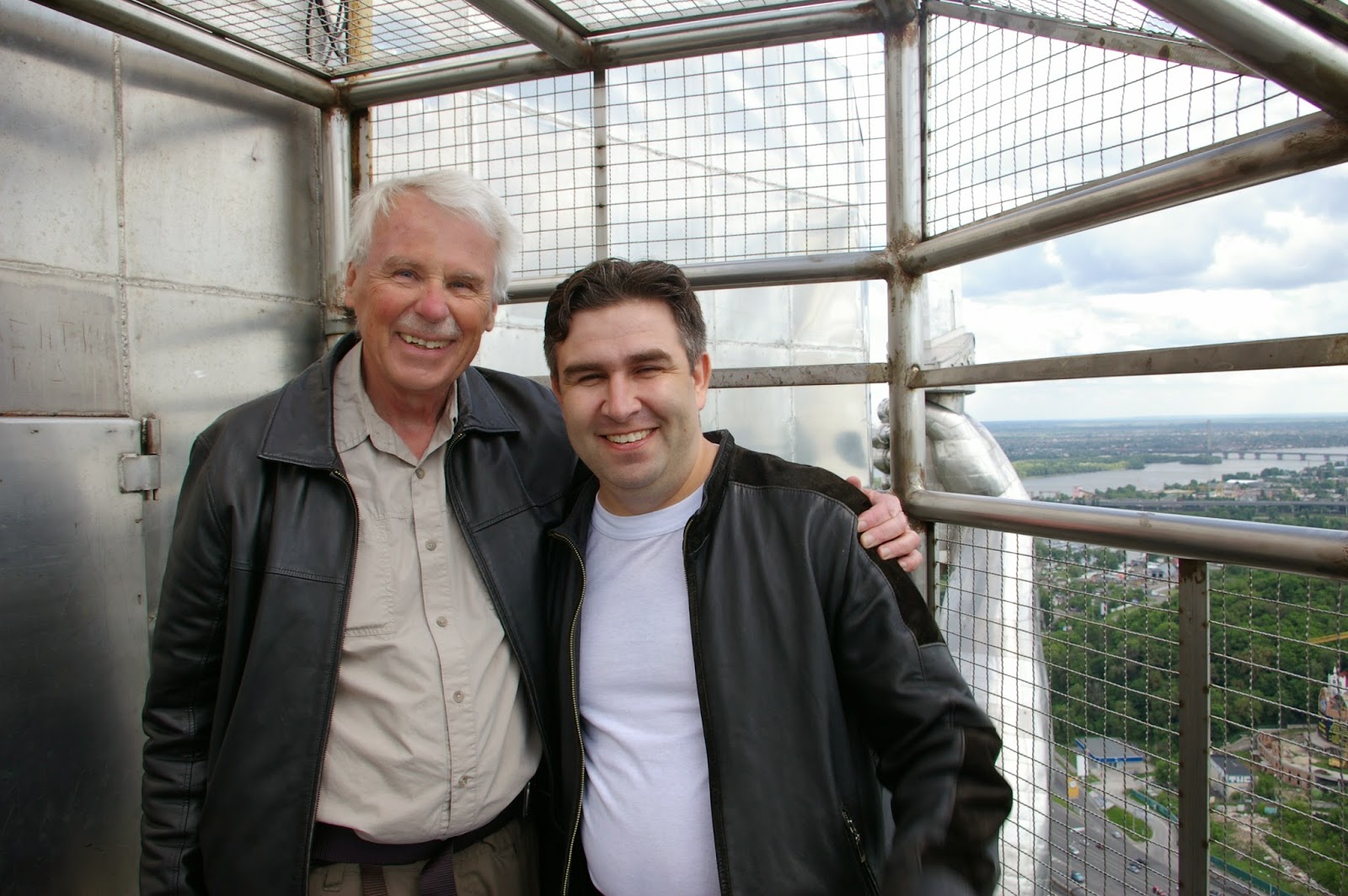 Our guide looked at me in amazement and said, “I never brought such an old man up here before”.  I was proud to be called an old man.  I just could not stop smiling.  After viewing the scene for a few minutes, the guide had one last surprise for us.  He unlocked another compartment and one at a time we were allowed to climb up another 10 feet above the cage where we got an unobstructed view of the city.  We could look right over the top of the shield.  The best part was I got a bird’s eye view of Pechersk Lavra – the most beautiful Orthodox Church in Kyiv with its famous underground caves.

For those considering making the climb, do not do it if you are claustrophobic, your agility is less than mine, or you do not like heights.  In strong winds, the statue can sway as much as half a metre.  It does have its challenges.

Last week I wrote about Oksana Donets and her desperate need for hip surgery.  Today, Mary and I had the pleasure of driving back out to her place and informing her that the board had authorized funds for the surgery.  The board authorized this because of the generosity of the supporters of the Mennonite Centre and people on Facebook.  What the board found really moving was the generous support of donors in Ukraine who became aware of the appeal on Facebook.  They truly sacrificed in order to help Oksana.

Both Oksana and her mother broke down with tears of joy when we gave them the news.  This has given them hope where previously they saw only despair.  I told Oksana that I want to see her walking next time we come to Ukraine.

Mary and I have one week left in our assignment.  In these unsettled times, we never knew if we would be able to complete our term.  Right now we are hopeful that we can.