WEEK 3 A WEEK OF THANKS WITH SOME HEAD BUTTING

This has been a week of surprises.  Most of them have been good surprises. It felt as if all the people we had helped over the past year had conspired to individually come forward and thank the Mennonite Centre for its support.  The following are some examples of the thanks we received.

The most elaborate thank you came from the new “Inclusive” school program in Molochansk (Halbstadt). Last spring we received an application from this new program which wanted to start a program in the school to deal with children with disabilities or behavioural issues.  This is a significant development in Ukraine as those types of children have generally been hidden in their homes. Bringing them out into the public and even using school classrooms is a first step in integrating these children into society.  This was a new government funded program which means that the government will provide the space, salaries for the staff and cover the cost of utilities.  The fact that the two classrooms assigned for this program were unusable was not the government’s problem.  The new director had to do some fund-raising.  She was turned down everywhere she went and came to us in desperation.  She was requesting $10,000 to upgrade the two rooms.  That is a large amount for our organization and our board approved a grant of $5000, which would enable them to refurbish one room.  The director was elated and they went to work getting a room ready for their program.

Toward the end of July, the director came over to the Mennonite Centre and invited us to come on Wednesday August 1 at 10:00 AM to tour the new facility.  We always like to inspect what we have paid for and agreed to come.  As we were walking over to the school that morning, Oksana, our manager, casually mentioned that there may be a dance group performing.  This was my first clue that this was more than a casual inspection. When we arrived at the school we saw a group assembled with some deputies (senior government officials) from Tokmak as well as the local news media.  That is when I was informed that I would be speaking at the event.  Flexibility is one of the requirements for our work in Ukraine and so I stood there in the audience assembling my thoughts.

The program was great.   They had some young singers as well as the local Ukrainian dance troupe.  I got a great picture of the dancers performing. 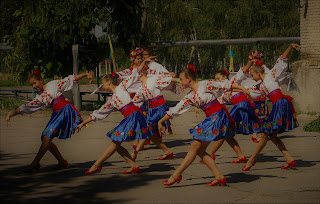 Of course there were many long, sometimes boring speeches.  The director of the new initiative spoke of the new programs including speech therapy sessions that could even help some deputies. This was a brave statement as a number of deputies were in the audience. They did laugh at the comment. When it was my turn to talk, I spoke briefly of the people back home who had memories of their ancestors living in the area and who felt a kinship to the people now residing in the former Mennonite areas.  It was this kinship that motivated them to donate money to enable the Mennonite Centre to operate in Molochansk.  I concluded by wishing them success in their new program.

Mary and I were presented with a special plaque thanking the Mennonite Centre for its contribution.  You can practise your Ukrainian by deciphering the words on the plaque. In the centre, it thanks the Mennonite Centre and its donors for their support. This is the first time that I have seen the locals actually acknowledge the existence of our donor base back home.  We are making progress. 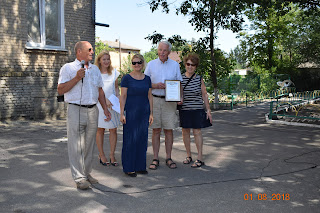 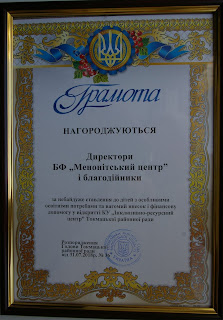 The ceremony concluded with an official ribbon cutting.  I saw them setting up the ribbon.  Next thing I knew I was handed some scissors and asked to come forward and cut the ribbon.  I realized that it was a special honour when all the photographers came forward to record the moment. I kept wishing that I was wearing long pants as my crumpled shorts just lacked dignity.  I was given a part of the red ribbon to take home.  For some reason this really meant something to me and I will keep this ribbon as part of my memories of working at the Mennonite Centre. 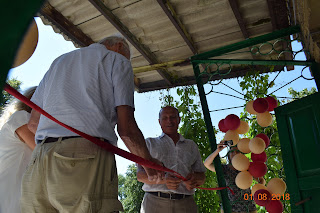 The most emotional thank you of the week came from a young man by the name of Andre Krashevskiy.  He was an orphan from our local orphanage who we helped with a scholarship. This financed his studies at a trades school where he became a qualified electrician.  He just showed up at the Mennonite Centre and wanted to share his story with us.  He has been very successful in his field and has now been accepted into a university where he is studying to become an electrical engineer.  He has also found his parents and is developing a relationship with them.  He is a delightful young man and we both just had to give him a hug as we know he did not get enough hugs growing up in an orphanage.  His level of maturity in recognizing the importance of stopping by the Mennonite Centre to say thanks was very impressive.

The most surprising thank you came from Dema, a young man who attends the local Mennonite Church and participates in their youth group.  This group spends a lot of time at the Mennonite Centre playing volley ball in the back part of our lot. It has become a drop in centre for all young people in town as everyone is welcome to join the group.  When we first arrived, Mary and I had noticed the volley ball net was in terrible shape.  When I mentioned this to Oksana, she explained that it was not our net but rather belonged to the church.  I told her I did not care who owned it but just wanted to get it replaced.  The next day we bought a new net in Tokmak.  It cost $35.00.  Dema wanted us to know that he had been praying for a new net.  Fund raising among the young people had not produced enough money.  Suddenly to see a new net had been an answer to his prayers and he wanted us to know his story.

While we are always glad to hear words of appreciation we did have one encounter that was not as pleasant. Right behind our apartment is a large sports field.  It is used for soccer games as well as joggers who like to run on the oval track.  If they get tired of jogging I have seen people get into their cars and do laps around the field in their vehicle. To save costs of mowing, the field is also used to feed the local goats.  These are brought out by their owners with the goat having a chain around their necks.  These long chains are then tethered to stakes to allow the goat to forage in a defined area.  One evening while walking around the track, we were charged by a goat that had broken loose from its stake.  Mary got the worst of it.  The horns have a rough edge and actually broke the skin at the top of her leg.  The area is also badly bruised.  We were finally rescued with the assistance of another jogger and heard what I assume were profuse apologies from the owner of the goat.  Mary’s injuries are healing well.  As a nurse, she did all the right things in treating the wound.  Following is a picture of the offending goat.  A picture of the injuries is not available. 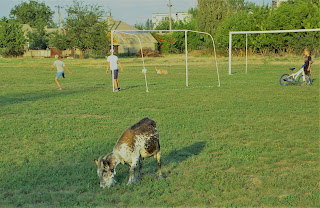 Tonight we are off to the former Mennonite Church at Schoensee.  This is now a Greek Catholic Church and they are finishing a large pilgrimage from Melitopol to Schoensee today.  We look forward to seeing the pilgrims arrive and will join them in a large celebration event.  I might get to report on this in my next blog.