The Mennonite Centre in Halbstadt has been very busy this past week with tourists from the Mennonite Heritage Cruise.  For three days we received one or two busloads of people who had chosen to explore the Halbstadt area.  This gave them the day in our area as well as a lunch of borscht and blinchkies prepared by Ira our cook.  Because of the contacts that we have built with locals over time, there were some new opportunities to explore. These special arrangements always come with a certain amount of risk.

For years, Mennonite tourists have come and admired the seven story Willms flour mill from outside of their large yard.  This year for the first time ever, tourists got to go onto the grounds of the mill and even explore the interior.  This happened because Oksana, our manager, had a conversation with the town mayor.  He had invited the news media to tour some local attractions in the hope of leveraging this increased attention into improving our roads. This is how Oksana found out that the mayor had some access to the mill.  Because we have helped the mayor recently with some projects, he agreed to use his influence to open the mill to the tourists coming this week.  He was personally there before the first bus arrived to make sure that the watchman unlocked the gate and that another guide had unlocked the mill.  The bus was late in arriving and the mayor left before the first bus arrived but everything went smoothly on the first day.

We all assumed that things would go well on subsequent days.  Of course, this is Ukraine and things can go off track.  On the second day, there was a new watchman who had not been told that we had access to the mill.  The mayor was also not present personally but Oksana called him and soon the gate was open.  However the watchman said he did not have the key for the mill.  The person with the key had been taken to the hospital by ambulance during the night and no one knew where to get the key.  I was with some disappointed guests as we circled the building from the outside.  By the time we got around, the door had been miraculously unlocked and we could go in.  I never did find out where the key came from.  Sometimes in Ukraine it is just better not to know.

The mill is a fascinating and dangerous place to visit.  The person appointed as guide the first day, just pointed at the door and the stairs and then let us proceed on our own.  There is rubble everywhere on the floor and no barriers where the floor ends and you can look down several storeys.  I climbed right to the top floor and walked around the attic.  All the original flour milling equipment is gone.  In its last years of operation, the place had been used as a milk cannery.  It is now an empty derelict building that stands as a silent testimony to the prosperous Mennonite economy that ended here one hundred years ago.

The tunnels built by Mennonites over 100 years ago were also popular with the tourists.  They had the opportunity to explore three different locations.  Again this was only possible because of the willingness of local authorities and property owners to accommodate our request for access.  There were many questions from the tourists as to why the tunnels were built and much speculation as to the motivation.  The exploration by the workers cleaning the tunnel entrances under the former Mennonite Credit Union (now the local sports school) has created increased local interest.  I am receiving requests from people who want to organize a party and crawl through the small opening and explore the areas that are not easily accessible.  Will I participate in that?  Maybe - I am tempted.  I will keep you posted.  I understand that there is an experienced team in Thailand to locate and extract us if something goes wrong.

The following pictures of tunnels are from an area that is not easily accessible.  It shows several tunnel areas as well as an underground well right in the tunnel shaft.  Presumably the well was dug to give access to water to people in the tunnel. 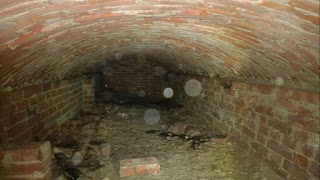 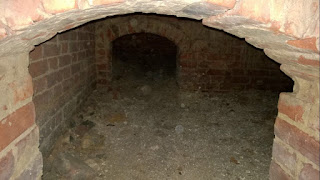 Now that the tours are over, the Mennonite Centre has to return the keys which got us the access to the underground structures.  This was the agreement we had with the owners.  We have also removed the special lighting that we installed.  If we had left the lighting in the tunnel under the old Central School, it is the belief of our staff that it would soon corrode from the moist air or be stolen by staff from the town that also had access to the area.

I was aware that there were members of the Fehderau family on the Mennonite Heritage Cruise.  I had written last year about the book written by their father who grew up in Halbstadt and came to Canada as part of the 1920’s migration.  I knew where their ancestral house was.  We discussed with Oksana about negotiating with the current owners to get access for the Fehderau clan to the house where their father (and grandfather) had lived.  Oksana did not know the people who lived there but I encouraged her to make a cold call and test the reception.  We walked there in the afternoon and could not get passed the gate.  One of our staff saw us and directed us to approach the building from the back.  There we bumped into a lady that Oksana knew from her fitness class.  This lady said that her mother lived in the Fehderau house but was away at the moment.  The lady had the key and promised to give the Fehderau family access.  We thought everything was arranged. The day before the tours started to arrive, the lady with the key had other obligations on one of the days of the tours.  We crossed our fingers hoping that it would work out.  It did work out.  I was in Berdjansk on the Sea of Azov with another tour group when Mary texted me that the Fehderau family was at the Mennonite Centre and had obtained access to the house.  Her text said that the family was overwhelmed to be inside their ancestral home. This made it a very personal trip for them and it was rewarding for us to have assisted in this. Special arrangements for tour groups are always a risk but very rewarding when they work out.

We are back to our normal routine at the Mennonite Centre. This morning we were met at the office door by a tearful lady from Melitopol requesting assistance for purchasing her chemo drugs. Yes we are back at work.