Week 4 Goodbye to My Dear Linda 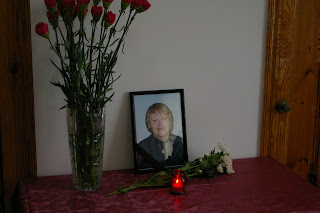 We awoke on Wednesday April 10 to an email from Ben Stobbe, the chair of Friends of the Mennonite Centre Ukraine (FOMCU), with the subject line reading, “Goodbye to my dear Linda”.  His wife Linda had been seriously ill for a while and we were anticipating her passing but still the news came as a shock. We held a memorial service for Linda at the Mennonite Centre in Molochansk on Saturday April 15.  A description and pictures of the event can be found at: http://www.mennonitecentre.ca/Memorial.html.   This web site also provides a link to YouTube videos of the memorial service.  We had a local Orthodox group known as the Rhapsody Choir participate in the service.  Their singing was beautiful and if you wish to listen to their performance, they are on Part I of the memorial videos, about 4 ½ minutes in to the event.  The sound from the small choir comes through amazingly well and as you listen, it is easy to let ones imagination take over and find yourself standing in a large orthodox cathedral, surrounded by beautiful artwork, listening to this choir in the background.


This last week we had a visit from Drs. Art and Marlyce Friesen.  Art is a board member of FOMCU, and when he is here, we spend a lot of time reviewing our medical programs and visiting local medical facilities.  The medical care in the former Mennonite villages is delivered by someone called a feldsher.  The closest Canadian equivalent to a feldsher would be a nurse practitioner.  They are trained to give a diagnosis and provide some treatment for many medical issues.  The Mennonite Centre has been providing many of them with a monthly allotment of medical drugs.  This appears to be working well as we could see a supply of medical drugs on their shelves.  In the past these shelves were empty.   Two of the feldsher’s offices were experiencing problems with access to local water systems.  Both were encouraged to submit proposals to us on getting this repaired.


All the feldshers we visited were women.  It was interesting to get a read on their personalities.  The first was aggressive and demanding.  The second was polite, analytical, and caring.  The third looked like village life was beneath her and she would rather be spending time with her boyfriend.  Take a guess as to which one is in the following picture. (Click on picture to enlarge it). 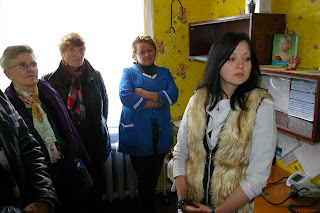 The mayor of Svyetlodolinskoye (formerly called Lichtenau) accompanied us on a number of visits to feldshers’ offices in his area. He wanted us to know that there were many people in his village that had benefitted from the work of the Mennonite Centre.  At each stop, these people magically appeared and we heard a number of testimonials of how people had received help and expressed their thanks for the assistance.  The lady in the picture is thanking us for supplying her chemotherapy drugs 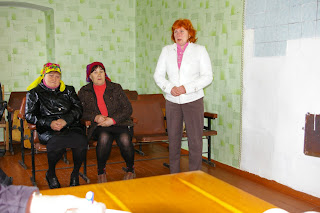 We also got to see the new seniors home in the Molochansk Hospital.  Two years ago this was an empty, unused ward in the hospital.  Now it is full of seniors and the place is humming with activity as the seniors shuffle up and down the long corridor.  The Mennonite Centre played a crucial role in funding the renovations.  We purchased a stove, washing machine, hot water tank, and refrigerator.  As well we paid for some of the work to improve the plumbing and seal the windows.  It was a major investment by the Mennonite Centre that will benefit this community for many years.


The local Kutuzovka Mennonite Church is building a new place of worship in Molochansk.  This work is proceeding slowly as money and manpower is limited.  This past week was another week of work as Victor Paetkau from Germany was here.  He has come to Molochansk a number of times and provides the leadership to organize the local volunteers.  Victor joined us for lunch on Sunday in our apartment and we discussed the politics of “umsiedler” emigration to Canada.  The term ”umsiedler” refers to Mennonites who were forced to stay in Russia after World War II and have been moving to Germany since the collapse of the Soviet empire.  Victor is of the opinion that umsiedler emigration to Canada is an attempt by the more conservative in the group to escape the decadence of the West.  Victor is descended from parents who came from the Chortiza Mennonite settlement in Ukraine.  In 1943 they escaped to Germany, but were captured by the Russian army in 1945 and were forcibly repatriated to Kazakhstan.  In 1987 they emigrated to Germany.  The pictures show the current church under construction.  Victor Paetkau is the worker on the right. 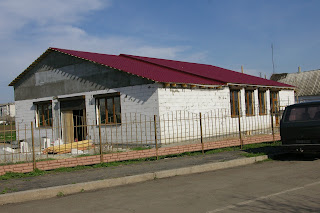 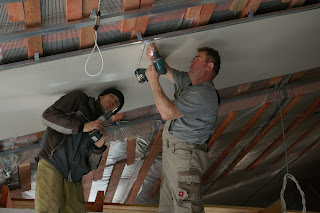 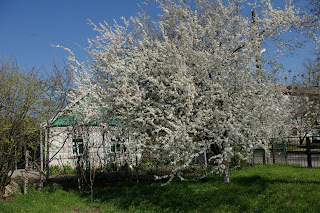 Have a good day wherever you live.


For more information on the Mennonite Centre, please go to:  http://www.mennonitecentre.ca/
Posted by Alvin Suderman at 00:58