The week started off with our first visit of the season from the Canadian Embassy.  Well actually it was my niece, Jeannette Menzies, coming in from Oslo Norway, where she works on Arctic issues at the Canadian Embassy.  She was accompanied by two of my sisters (one of whom came in from Cairo) and a cousin from Waterloo Ontario.  They came for the Molotschna Mennonite experience and to find out what Mary and I are really doing in Halbstadt.  While this blog is supposed to be about our work at the Mennonite Centre, I will take the liberty of describing a few experiences we had with my family.


It is a unique experience to have all ones siblings together in Halbstadt.  We drove down to Lichtenau to see the house that our great-grandfather built and where our mother was born.  It is now the mayor’s office but we were given free reign to wander throughout the building and try to imagine our mother living there with her family.  We went through every room and shared stories that we heard from our mother.  We even recreated the famous photo taken in 1890 with my great-grandparents proudly posing in front of the house with one branch of their family.  If you count the cost of all the airfares to get there, it is probably the most expensive photo ever taken with my camera.


One afternoon we recreated the start of our mother’s emigration to Canada.  We had a detailed account of this trip written by my aunt.  Unfortunately, she hand wrote the original document in German in the Gothic script.  A knowledgeable friend in Winnipeg had kindly re-written it for us and now all we had to do was translate it into English.  We worked on the translation collectively, and then boarded the train in Halbstadt (now called Molochansk) as our mother had done in November 1928, stopped at Lichtenau where relatives had met the train to say goodbye, and then continued on a few more kilometres to Feodorovka.  My mother’s family disembarked at this station and switched to another train going north to Moscow.  We continued on south to Melitopol where we were met by Dema and Oksana (staff at the Mennonite Centre).  We enjoyed a great meal together and then drove back to Halbstadt.


Another day we visited the local police station as they were looking for assistance in some planned renovations.  My niece, with her embassy perspective, expressed an interest in getting a better understanding of local issues and we invited her to join us for this meeting.  My niece has previously worked at the Turkish Embassy and has travelled extensively on embassy business in some of the surrounding countries that used to be part of the Soviet empire.  I personally hope that she will someday work in the Canadian Embassy in Kiev – maybe even have the role of Ambassador.


The police station desperately needed some upgrading. For example, their holding cell had no bars on the window and even I could have made a break for it.  The police agreed to give us a written request on specific projects where they needed help.  Before we left, I asked if I could take a picture of one of the police officers in their building.  This was a problem to them as they all were out of uniform.  They quickly offered to bring in a uniformed police officer from the street to pose for a picture.  I accepted the offer and was surprised how long we had to wait.  Eventually a uniformed policeman showed up in very well pressed outfit.  He looked sharp.  I suspect they had taken him home to get his uniform pressed.  My niece posed with the police officer. 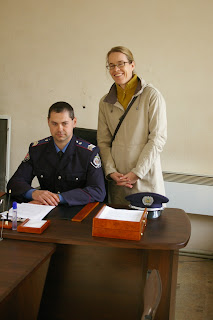 After the police station, we stopped at the Molochansk School of Music to investigate another opportunity.  We had a beautiful impromptu performance from one of their voice students and my niece got to play their grand piano.  While it is impossible to involve every guest or supporter of the Mennonite Centre in our daily work, I enjoyed the opportunity to share these experiences with my niece who understands the difficulty of trying to identify problems and resolve issues in another culture. 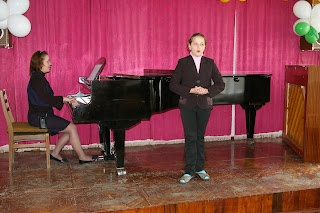 On Saturday we drove south to the Crimean Peninsula.  We were looking for the Mennonite village of Spat.  My cousin’s father was born in Spat and left in 1929.  It was her first visit and it was a beautiful experience for us to explore this village with her.  We found a local historian who was as interested in our story as we were in what she had to say about the local buildings built by the Mennonites.  She has had no contact with other historians and we promised her a copy of the Ukrainian version of Rudy Friesen’s book.  We will stay in touch with her and if possible invite her to come to the Mennonite Centre in Molochansk for a visit.


I was fascinated with some of the non-Mennonite information we got from our local historian in Spat.  She told us that in 1945, Churchill landed at the nearby airbase on his way to Yalta.  I was interested because the father of a friend in Winnipeg flew the decoy airplane on that important visit and would also have landed at that airfield.  When our historian found out I had an interest, she took us to the airfield and talked her way into giving us a tour.  This is amazing because it is still a large active military base under the control of the Russians.  We walked around the base and took many pictures.  When we left, the Russian guards greeted us in English and I shook hands with them as we thanked them for the unique opportunity. 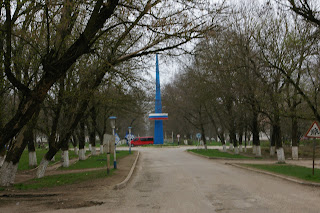 For more information on the Mennonite Centre, please go to:  http://www.mennonitecentre.ca/