On Tuesday morning we left Molochansk at 7:00 AM for the 2-hour drive to Zaporozhe.   We had been invited to attend a signing ceremony at the Zaporozhe Regional Oblast Hospital.  The signatories would be the Physio/Occupational Therapy Department of the hospital and the U.S. Association of International Development. It is important for us to know what other foreign organizations are assisting in Ukraine.  The meeting was very useful for us as we got an update on how our support is helping the hospital as well as learning more about how the health care system in Ukraine is functioning.

This was the first time that Mary and I got to meet Lesia.  She is a young enthusiastic physio therapist who sees it as her mission to introduce that discipline in Ukraine.  Lesia received her physio training in Winnipeg.  She even spent some time working on the burns and plastics ward at the Winnipeg Health Sciences Centre, where my wife Mary worked for 30 years.  Lesia described that ward as her hardest experience as she had to deal with burn patients.  Lesia came to Winnipeg with three others for training.  She was the only one to return to Ukraine while the others stayed on in Canada.

Physio/Occupational therapy is a new part of the health care program being introduced in Ukraine.  At present, there are only three hospitals in the country that provide this service.  They are in L’viv, Kyiv, and Zaporozhe.    Most doctors do not recognize the role of physio/occupational therapy.  The standard belief is that surgery will fix the problem and once people are healed, they can go home and continue with their lives.  We were given the example of someone coming to the hospital with a club foot.  It seemed to us that we heard that they amputated the foot and sent the person home.  Another successful surgery as the person no longer had a club foot.  We may be wrong on what actually happened but we both independently recalled hearing that as part of the translated conversation.

The actual signing of the agreement was a non-event.  The doctor signing the document commented on the many lawyers that had been involved in drafting the multi-page agreement and then formally signed the document.  The agreement provided for financial support for Lesia and the promotion of the physio/occupational therapy program in Ukraine.  The Mennonite Centre has also supported this initiative.  We do not have the funds to provide ongoing support but have helped them acquire equipment and refurbish facilities.  They are well on their way to being accredited by a world organization.

After the signing, we talked about general issues related to health care.  Ukraine is training many new nurses.  The problem is that Poland is actively recruiting the graduates and most leave Ukraine for better opportunities elsewhere.  They recognized the need to increase local salaries to keep people from leaving.  They talked about another issue which they described as a legacy from Soviet times.  The medical colleges are not connected to hospitals.  Medical graduates leave their place of learning with a knowledge of theoretical medicine.  After graduation they go to the hospitals where they learn what health care is really all about.  In the West, medical students spend a lot of time in hospitals making the rounds with doctors as part of their training.  Integrating medical training with real life practise is still new in Ukraine.

After our meeting we toured the facility and saw the room which the Mennonite Centre has furnished.  There is a large sign over the entrance acknowledging our contribution. 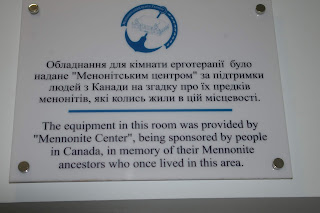 The room has various equipment including a kitchen.  We provided all this to help train people to cope in their home environment.  An elderly man was at a table learning how to pick up an object and place it in a container.  He was recovering from a stroke.  When we talked to him later, he said that physio was “giving me back the joy of life”.  That was a meaningful thank you.

After our meeting at the hospital we drove north to the village of Novopetrovka.  In Mennonite times this village was called Eichenfeld (field of oaks).  There was a terrific massacre here on the night of October 26, 1919 when 83 people were killed. We are planning on commemorating that event 100 years later.  Olga Rubel, our representative in Zaporozhe, has had preliminary discussions with the mayor.  We came to see the possible venue for the event and to meet the local school principal.  She is a colourful lady and promised to help publicize the event at the school and obtain some volunteer children to participate in our service.  The village has been good in looking after the memorial site and we want to talk about the event and thank them with a small “memorial gift”.  This gift is based on the Orthodox tradition of giving friends and neighbours of the deceased a memorial gift of food for them to eat and remember those who have died.

This week we had the opportunity to meet Anatoli.  I will admit that we generally know him as the “turkey man” as he used to raise turkeys on his property.  We always walk past his house when going to the Mennonite Centre.  He cannot speak a word of English, but he and his wife have always been very kind to the North American Directors.  Anatoli’s wife died over a year ago.  He is close to 90 in age and quite frail.  His eye site and hearing are both bad, but he recognized who we were after some loud shouting.  He has always been very fond of Mary.  He embraced her and started kissing her hand.  He knows his connection to Mennonites as his grandfather was a coachman for one of the prominent Mennonite families in Halbstadt before the revolution.  It is always a delight to see him.  He cried when he tried to talk about his wife.  He seems to have people looking after him.  All is right with the local world when one can connect with Anatoli.

While Mary and I are still in Ukraine, we are busy planning our Winnipeg fund raising event.  It will be held on Saturday, November 16, 2019 at 7:00 PM at the Douglas Mennonite Church, 1517 Rothesay Ave.  The male Faith and Life Choir will be singing.  Please mark this event on your calendar and we hope to see you there.