I completed my last blog by speculating as to what I was going to say at an upcoming conference dealing with special needs children and being attended by pediatricians, psychologists, and specialized children’s workers.  The conference had a special focus on autism.  I was not asked to be a speaker; I was “informed” that I would be speaking.

The desire to hold this conference came from the Promitei Centre, a local institution in Zaporozhye that looks after special needs children, and an NGO group “Unity” that advocates for changes in Ukraine to improve the life of its citizens.  The Mennonite Centre has worked closely with both groups.  The Mennonite Centre agreed to sponsor this conference at a cost of 20,000 greevna.  That is $1150.00 Cdn or $875.00 US at today’s exchange rate.  This money covered the cost of bringing in a speaker from Kyiv, paying the transportation costs of those attending, as well as covering the cost of the venue and the food.  As the sponsoring organization it was quite proper that a representative from the Mennonite Centre get to welcome the guests and give a context as to why this conference was being held.

The objective of the conference was to get doctors to make an earlier diagnosis of autism and then provide an environment where children with this diagnosis could learn social and life skills.  From one of the speakers at the conference I learned that there is still a tendency from Soviet times to hide children with this problem in their homes.  Society does not want to see them or acknowledge that everything is not perfect.  Consequently parents of a child with autism are given a 24/7 life sentence of looking after this person in their home for as long as they live.  Once the parents die, these special needs people are moved into a “Level  4” facility where they are fed and housed but otherwise ignored to live out the rest of their lives.

I was asked to be very brief in my comments but also very clear in stating the objectives of the conference.  I wanted the attendees to know what the Mennonite Centre was and what our motivation was in sponsoring this event.  I started by commenting that I must have descended from people with restless genes as my ancestors had moved from the Netherlands to Prussia about 400 years ago.  After 200 years in Prussia/ Germany, they moved into this region of Ukraine where they lived for 100 years before moving again to Canada.  I told the audience that there were many people in Canada and the United States who had grown up hearing their parents talk about life in Ukraine and that these people felt a personal desire to help improve the life of the current inhabitants of the area.  That is why they donated to money to the Mennonite Centre to allow our organization to sponsor this conference.  I also told them that we wanted to see people with autism be given a chance to live as full a life as possible.  I did all of this in 2 minutes with Oksana, my interpreter also taking that much time.  At the end of my speech, Oksana and I had agreed to reverse roles and I finished my speech in Russian by saying “spasiba”, which Oksana translated as “thank you”.  I saw it as a test to see if the audience had been paying attention and hoped that I might get a smile or two.  The audience actually laughed.

The choice of main speaker was brilliant.  He is an American pediatrician by the name of Dr. James Peipon and has lived in Ukraine for 14 years. He serves with an organization called Ukraine Medical Outreach.  Their slogan is “Treating the Whole Person, Body and Soul”.  He was an engaging speaker who made a number of important points.  First, we all have a bit of autism in us which manifests itself in certain repetitive behaviour.  We usually learn to control it and can lead a normal life.  His second point was that when parents suspect their child may be autistic, statistics show that the parents are almost always correct.    This was a note of caution to the pediatricians in the audience to listen to the parents.  The tendency in Ukraine is for doctors to see a child with autistic symptoms and to say, “Let’s wait a bit and see if this behaviour will go away”.  Dr. Peipon urged them to refer these children right away to a psychiatrist or other specialist and not wait.  The sooner that these children are placed in a proper environment, the sooner they will have a chance of learning social interaction and have a better chance of coping in society. His third point was to tell people that after a diagnosis, they have to do something.  Sitting back and expecting someone else to initiate the solution was not acceptable.

The capacity audience was engaged and there were many questions.  There was a request for a more such conferences.

An interesting “medical text” was handed out for doctors to take with them.  It would help them as well as parents recognize the symptoms of autism.  The book was totally in Russian and did not mean anything to me, but Mary pointed out one page at the bottom where it had a picture of a child lining up his toys.  Mary knew from a friend of hers with an autistic child that this was a symptom of autism.  I then studied the page and started recognizing what the pictures were telling me.  The book was a popular item for attendees to take home.  You can click on the picture to enlarge it.

The news media was present and the whole conference was recorded by a local television station.  I even got interviewed.  I was hoping that they would ask me something about Mennonites but instead the interviewer wanted to know how such children were treated in Canada.  I told her that we try to give them as normal life as possible by having such children attend the usual classrooms with the special needs child receiving care from a dedicated teaching assistant.  I should have mentioned that the cost of the teaching assistant is covered by the government.  In Ukraine, they can have special assistants in a classroom but the costs have to be covered by the parents.  Almost no one can afford this expense. 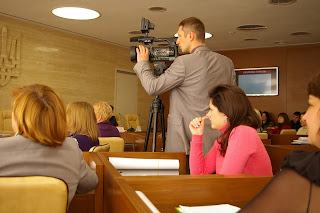 As a former government employee, I have attended many conferences over the years.  The best that can be said for most of them is that they were of some interest.  Not only was this conference of some interest to the attendees but from the level of interaction, I would expect some of them to actually apply what they learned.  The conference was that good.

The Mennonite Centre received a lot of mention in the conference.  It was an excellent investment for our organization.  Thank you to all donors who have given generously to allow the Mennonite Centre to have sponsored this event.

If you wish to know more about the work of the Mennonite Centre, you can check out our web site at: http://www.mennonitecentre.ca/ or follow our daily activities on Facebook at: https://www.facebook.com/Mennonite-Centre-Ukraine-735361069838076/
Posted by Alvin Suderman at 07:16