We arrived in Molochansk one week ago.  It is hard to comprehend how much has happened in one week.  We do feel that our comfortable apartment in Molochansk is already our home.  Thursday was the first day that we felt a bit useful and are starting to get comfortable in our role as North American directors.  The staff at the Mennonite Centre are extremely friendly and helpful and this has assisted in making us feel comfortable.  I would like to high-light some of the major events of the past week.
Sunday, March 6 saw us at the airport preparing for departure.  Our bags were packed, electronic tickets were in hand, and my decoy wallet containing some fake credit cards, an expired drivers license, and some genuine Canadian Tire money were ready to go.  I was fascinated by the reaction of the somewhat jaded Air agent, who saw our destination of and was forced by his own curiosity to ask – where are you going?  Yes we were off to – a place I had heard so much about from my parents and I would now have an opportunity to live there.  Our flight out of was 2 hours late.  We had 15 minutes in to make the long dash to the section for international departures.  We made the connection but our luggage was left behind.  It caught up with us 2 days later.
We were met at by Dema Bratchenko, the manager of the Mennonite Centre.  While giving us a ride to our apartment in Molochansk, he explained the local traffic laws, showed us the likely locations for police traps, enforced the need to memorize the road in order to avoid potholes at highway speeds, and stopped in Zaporozhyze at McDonalds for coffee.  We finished off the day with a beautiful borsht dinner with Dema and his family.  It was a comprehensive introduction to and its culture for two weary travelers.
Wednesday was our first day at the Mennonite Centre.  We were officially received by the staff in a traditional Ukrainian manner – a lady in full Ukrainian dress greeted us with a loaf of bread and salt.  We had to break off a piece of bread, dip it in the salt and eat it.  We were really touched by the friendliness of the staff and the warmth of their greeting.   Apparently this is the first time that North American directors have been greeted in the traditional fashion.  We felt very honoured. 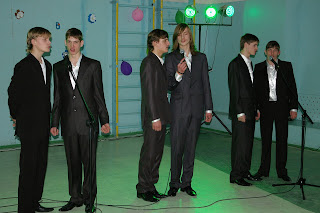 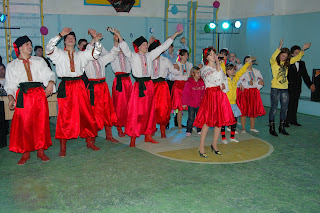 On Friday we had an opportunity to attend a concert to see performers from a local orphanage.  The program consisted of singing by individuals and groups as well as some beautiful dancers in bright costumes.  We were amazed at the high level of professional performance by the children involved.  The event was sponsored by the Mennonite Centre and enabled the people in town to see a group perform that might otherwise not have a chance to be noticed in society.  Orphanages are isolated institutions in .  They have their own schools and accommodations on site and the orphans are not really visible to the surrounding population.  The event was well attended by local school children as well as a number of seniors.
We attended church Sunday morning in a neighbouring village.  The church is used to having North American directors from the Mennonite Centre attend their church.  We were given a warm welcome and asked to introduce ourselves.  Dema attended the service with us and acted as our interpreter.  It was touching to hear a prayer from the Pastor thanking God for the warmer weather thus reducing the need to buy expensive gas for heating.  The cost of heating homes is a major issue in the area.
Sunday afternoon was sunny and we went for a long walk.  This took us over the and into a neighbouring .  For me this was a momentous walk as I know that my grandfather had walked this route many times in 1920-21. According to my mother he went here scavenging (a more painful word would be begging) for food during that time of famine and unrest in .
Since our arrival, Mary and I have participated in a number of meetings with petitioners coming to the Mennonite Centre asking for assistance.  It is a difficult job to be making decisions on behalf of distant donors. It is obvious to us that the need is real.  While not living here any more, the Mennonite community is still impacting the lives of people living in the area.
If you would like to find out how to support the work of the Mennonite Centre in , please click on the following link: http://www.mennonitecentre.ca/
Alvin and Mary Suderman
Posted by Alvin Suderman at 04:57